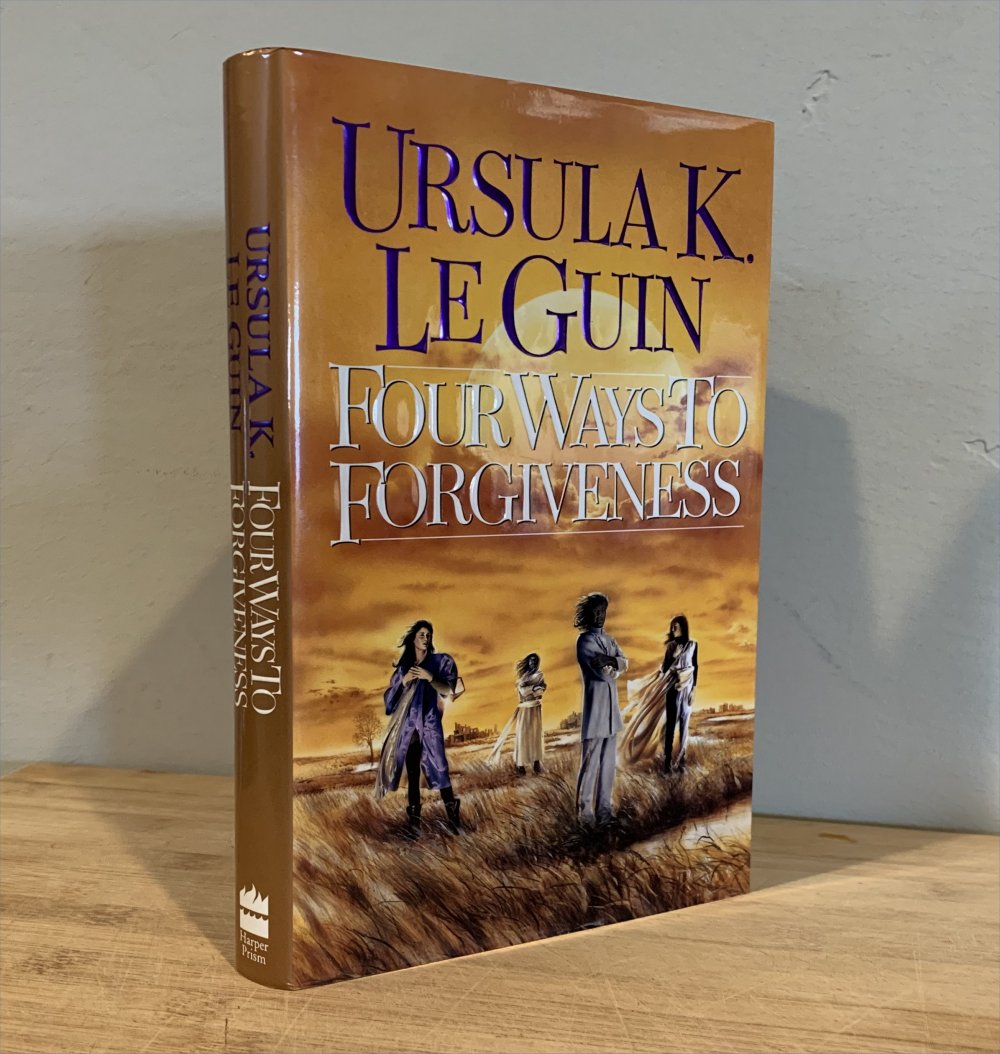 This week’s novella being covered by the Facebook Group that I post about every Sunday is “Forgiveness Day” by Ursula K. Le Guin. It was first published in the November 1994 issue of Asimov’s Science Fiction, and less than a year later was included in the author’s collection Four Ways to Forgiveness (1995) along with three related stories.

Le Guin is one of the best known and most highly honored science fiction writers — not just of female science fiction writers. She debuted at a time, the early 1960s, when female SF writers were still a novelty; one of her early stories, “Nine Lives,” was published (in Playboy, perhaps an extenuating circumstance) as by “U. K. Le Guin” so as not to put off male readers. She had a brilliant first decade, both in SF and fantasy, with The Left Hand of Darkness (1969) and The Dispossessed (1974), both of which won both the Hugo and Nebula awards, on the one hand, and the fantasy trilogy beginning with A Wizard of Earthsea (1968) on the other. She continued producing novels and short work steadily for decades. As a short fiction reviewer in the 1990s (for Locus), however, I was especially struck by her work in that decade as some of her best ever, especially the numerous novelettes and novellas that explored variants of human societies in her Hainish universe (the universe that included the two SF novels just mentioned). Some of those stories imagined different sexual and gender roles, and were especially innovative and provocative. The one of these that springs to mind is “The Matter of Seggri” (also 1994), though I haven’t reread any of these since they were first published.

Until now, with “Forgiveness Day.” It’s set in the Hainish universe, in which many planets (including Earth) were settled hundreds of thousands of years ago by humans from a world called Hain. Since then the planets lost contact with each other and drifted apart, culturally and even genetically. And now an organization called the Ekuman is contacting them to try to form a sort of Federation. This story and the other three in FWTF are set on the twin worlds of Werel and Yeowe, which are at war, as Ekumen envoy Solly arrives on Werel. The story begins with her discomfort with Werel’s thinly-disguised slave society, with “owners” and “assets,” and with her annoyance at her uptight guard, Rega Teyeo. Despite constraints placed on her as an outworlder, she meets a dance troupe of transvestites and begins an affair with one of them.

Then the story pivots to the life of Rega Teyeo. How he grew up on an isolated farm, took on his heredity role in the service, and enjoyed only a few days of a marriage before he was sent to war, for years. By the time he and Solly meet, he has resigned himself to having no personal life at all, and has formed rigid ideas about the roles of society and of women. As he tends to Solly, he increasingly disapproves of her crude manners, and her affair with the transvestite dancer.

And then both of them are taken prisoner by… someone, they don’t even know who. Rebels attacking the capital on festival day? Stuck in a cell together with minimal outside contact, they learn to tolerate each other, then tell each other about their lives, their societies. By the time they are (spoiler) rescued, much has changed between them.

This is a fine, moving story on the level of character and culture. Reading it by itself one might be forgiven for asking why it’s science fiction, exactly. Couldn’t such a situation come about in any exotic, war-torn nation? But I wouldn’t pass such a judgment without reading the other stories in the book FWTF, which I’m sure give meaning to this story in the context of the history of the two planets Werel and Yeowe. In fact, it wasn’t until I sat down to write this review that I noticed the book has a 20-page appendix of “Notes on Werel and Yeowe,” complete with pronunciation guides and essays on each planet’s culture and natural history. I wish I had gotten to the rest of this book this past week! Well, I will soon.

As almost an aside, I note Le Guin’s profligate imagination, her willingness to take nothing for granted, to tweak every dial on the reality machine. On the first page of this story:

She was high for days on the altitude, the tiny, brilliant sun pouring vertical light into the noisy streets, the peaks soaring up incredibly behind every building, the dark blue sky where great near stars burned all day, the dazzling nights under six or seven lolloping bits of moon, the tall black people with their black eyes, narrow heads, long, narrow hands and feet, gorgeous people, her people! She loved them all.

Of course, every planet will have different orbital attitudes, nearness to other stars, fewer or more moons, and so on. Most science fiction writers wouldn’t bother pointing that out. Le Guin does. It provides a context for her story about people like us, who are different from us.