Kasner & Newman, MATHEMATICS AND THE IMAGINATION 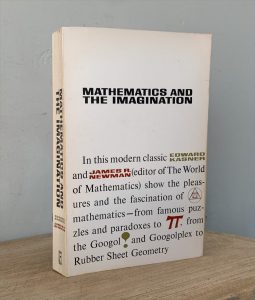 Here is another older book out of my library, one to set alongside George Gamow’s One Two Three… Infinity, which I reviewed back in August. This book is even older. Published in 1940, this is Mathematics and the Imagination, by Edward Kasner and James R. Newman, with a Wikipedia page that oddly summarizes only the first four of its nine chapters. This book, like the Gamow, is still in print, from Dover. (The Amazon “Look Inside” samples includes the complete high-annotated table of contents.)

My edition, in the photo here, is a Simon & Schuster/Fireside trade paperback with a 1967 copyright. I bought it in 1980. After I’d graduated from college but before I began my aerospace job. I read it back then, and have spent a couple three hours paging through it this week in order to summarize here.*

It shares some themes with the Gamow (which came later of course), in particular the ideas of infinities and topologies, but includes many familiar mathematical ideas not in Gamow: transcendental numbers (pi, i, e) and how they relate to big problems; four-D and non-Euclidean geometries; chance and probabilities. It ends with the heavy-weight subject of “change and changeability,” i.e. “the calculus,” all about analytical geometry, converging series, functions, limits, derivatives, areas under curves, and so on. With lots of diagrams and equations! Calculus is traditionally a freshman college course. Moreso than Gamow’s book this one is full of equations (especially expansions of infinite series) and geometric diagrams.

This book has a couple chapters in the middle about fun topics, things math informs but which most people wouldn’t realize were mathematical in nature. These are chapter 5, all about puzzles, with lots of examples: the logistics of ferrying people across a river; three jars [like several iPhone games currently]; beer drinking; the Chinese ring puzzle; the Tower of Hanoi; Nim; Josephus; the “15 puzzle” (I had one as a kid of 5!), and so on. And chapter 6, about various kinds of paradox, some due to non-intuitive situations, some due to logical paradoxes (e.g. about the village barber who shaves everyone in the village who does not shave himself). And a footnote (there are lots of footnotes, placed at the end of each chapter) concerning optical illusions, such as diagrams with parallel lines that don’t look parallel, two pencils that look of unequal length but aren’t, the vase that’s a profile of two people and vice versa.

Actually the heavy-weight bit is at the very end, in a 6-page epilogue simply called “Mathematics and the Imagination.” Which begins by asking the question, so what is mathematics? For centuries a philosophical debate has gone on about whether mathematics exists outside the human mind, or whether math is an invention of the human mind. Discovery, or invention?

On the one hand, the idea of non-Euclidean geometry seems to have been invented by our minds, because we don’t live in such a geometry and cannot have observed or literally discovered it. On the other hand, the authors wonder if mathematics isn’t more than relationships in logic and math that an omniscient being would find self-evident: math as a “factory of tautologies.”

the everlasting struggle for greater comprehensiveness and greater freedom: from the particular to the general; from configurations bounded by straight lines to pathological curves; from the properties of this or that specific figure to the properties of all figures; from one dimension to n dimensions; from the finite to the infinite.

And therein is the service of imagination to mathematics, anticipating what might lie ahead, beyond our “slow-moving caravan of well-ordered thought.”

Math, authors note, has rules, just as music, painting, and poetry do; but math “reaches pinnacles as high as those attained by the imagination in its most daring reconnoiters.” And so “For in their prosaic plodding both logic and mathematics often outstrip their advance guard and show that the world of pure reason is stranger than the world of pure fancy.”

These final reflections are interesting to me because they dovetail — or maybe they inspired! — notions I’ve long had about the limits of human intelligence and the potential of alien intelligence. Truly advanced aliens — consider “omniscient” in the above discussion a placeholder for them — might find obvious much of what humans struggle to understand. Logic and math would be tautologies to them, not disciplines that need study.

Why would this be, considering how evolution works? One key is how remarkable it is that our minds can construct (invent) such elaborate systems of abstruse math and logic that only very few understand, certainly not the average person, and which aren’t necessarily “useful” in a survival way. But why would any other kinds of creatures understand anything even further beyond human comprehension? (There must be such things, or we would no longer have mysteries about the universe.) It would have to be something in their environment, something that triggered the development of minds to be able to handle complexities that human can live without.

Anyway, this is a 1940 book and some of its conclusions may have been overtaken by evidence. We *do* live in a non-Euclidean universe; space *is* curved by gravity (or is gravity), as Einstein theorized way back in 1915, and which these authors don’t take into account.

You’d think if anything logic and math would be fixed and invariant, insusceptible to mere “evidence,” but maybe not. At least maybe not about the idea of whether math is invented or discovered. As I’ve noted a few times in this blog, some thinkers dismiss scientific “theories” like string theory as being mathematically pretty but not scientific, because not available to test; while other thinkers have noted that, time and again, abstruse math once dismissed as being only of abstract interest has, in fact, turned out to describe certain newly discovered aspects of the natural world.

I have a shelf full of books about math, some more populist and some more abstract, by Davis & Hersh, Rucker, Paulos, Poundstone, Smullyan, and others, some of which I’ve read but not all, all the way up to a brand new one by Manil Suri (who would build the universe from math), and as I peruse these systematically in future weeks and months I’ll be interested in how this fundamental philosophical question has played out, since 1940.

* And discovered that I *wrote* in this book! Albeit in pencil, at the bottom of page 189, trying to solve one of the puzzles in a footnote to the puzzles chapter. Still, I never write it books, consider it a kind of sacrilege. Yes I’ve heard all the arguments — *use* your books to best advantage, you’ll die soon anyway and there’s no market for second-hand books, even pristine ones, and so on. Still. I don’t write in books. But I do take extensive notes, on a notepad, or as I read sitting at my computer.

This entry was posted in Book Notes, Mathematics. Bookmark the permalink.