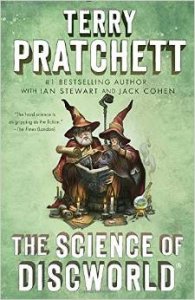 I was looking at the third volume in this series, published in the US last week (the publisher, Penguin Random House/Anchor, has kindly been sending me copies), and realized the book wasn’t at all what I’d thought at first glance – i.e. not about justifying the ‘science’ of the Discworld universe, as the title might suggest (the way a book like THE SCIENCE OF STAR TREK might try to do) – but something quite different and much more interesting. I read a few pages of that and then went back to read the first volume, end of last week.

[I confess I have not read any Discworld novel. I need to catch up.]

What these books do (a fourth is due in the US later this year) is *contrast* how the fantasy universe of Discworld works, with the reality of how our own universe works, on two basic points: in Discworld, magic works, and things happen for reasons, i.e. because of narrative imperative. Discworld has ‘narrativium’ p10. Our real world doesn’t have narrativium, though the concept is fundamental to how humans *think* about that world, p11.

The book’s structure alternates fictional chapters (3 or 4 pages each) of a story in which the wizards of Discworld have accidentally created what they call Roundworld, i.e. our own Earth, inside a container that’s infinite on the inside (and thus encompassing our entire universe), with nonfiction passages (8 or 10 pages each) that expound upon the points raised by the story. As the wizards advance the arrow of time to watch Roundworld develop, they are concerned by how things seem to develop without magic and without narrativium – just by virtue of the ‘rules’ or ‘laws’ built into it. As the wizards puzzle things out in the fiction chapters, the nonfiction chapters [presumably by Stewart and Cohen at least mostly] explain what they don’t understand.

So the book is a primer on current scientific thinking about the origins of the universe, physical theories of everything, the formation of our planet, the history of life on earth, the evolution of dinosaurs and ultimately of humans, told in a straightforward, insightful and occasionally cheeky, occasionally profound, manner.

Will not summarize entire book, but will note several insightful points. [Page references are to the Anchor trade paperback edition, where p12t means top of page 12 (m=middle, b=bottom), and p18.3 means 3/10 of the way down page 18.]

P12t: Many important questions of science are not about how the universe actually is, but about what would happen if the universe were different.

P33.3: regarding deep mysteries like consciousness: “A scientist wants plausible answers to such questions, not just an excuse to stop thinking about them.” (Contrasting, of course, the religious and ID proponents who would say God did it, end of story.)

P37m, authors use the idea of a space elevator as a recurring metaphor for e.g. various evolutionary developments: the initial expense of the elevator would be enormous, but once it’s done, and you can balance the cost of moving things up with the energy of things coming down, it’s relatively free.

P41 We have ‘magic’ in our world to the extent we are surrounding by technology that we don’t personally understand; cf. Clarke’s law. But TV, e.g., is magic to everyone who uses it *now*.

P43 Education is a special kind of magic that humans use to pass ideas from one generation to the next. But early explanations to children have to be simple: “lies-to-children”. Most basic science is lies-to-children; only later do some learn the more complex ideas. Examples p44, and footnote comment: students arrive at university confidant they know nearly everything, and leave years later certain they know practically nothing. (I see Lie-to-children has its own Wikipedia entry!)

P52, discussion of human concepts of beginnings and becomings, but the universe may not actually work to those ideas. E.g., our best idea about the beginning of the universe, per Hawking, is that it *didn’t* begin, any more than there’s a place further north than the north pole. But we need creation myths, p58b, that appeal to our sense that things must have beginnings.

P59 In contrast some things about are becomings, with no clear boundary from one stage to the next – e.g. abortions, or gender identity between male and female.

P103-104, description of a computer program called Langston’s Ant, which produces very simple results for a while, then chaotic results, and then emergent order, all resulting from the same simple rule. (The point is, a single simple “theory of everything” wouldn’t ‘explain’ in any obvious way the emergent order that might result from it.)

Concepts like gods, truth, and soul appear to exist only in so far as humans consider them to do so … But they work some magic for us. They add narrativium to our culture. They bring pain, hope, despair, and comfort. They wind up our elastic. Good or bad, they’ve made us into people.

P219 Amidst some explanation of how DNA works, i.e. it’s not a blueprint, but a series of instructions that have been cobbled together by natural selection because they work, not because they make any kind of obvious sense. (One of many reasons there is rarely a single gene for any particular characteristic.) The comparison is an engineer who ‘evolved’ electronic circuits using a sort of genetic algorithm, repeating attempts each generation by selecting those that were closest to the desired answer. Amazingly, after some 4100 generations a perfect solution was found—which used only 32 of the 100 available logic cells.

P274, in a chapter about probability and statistics, with details about how ‘coincidences’ happen all the time, and so on, and stressing that apparent remarkable incidents are often the result of selective reporting.

Humans add narrativium to their world. They insist in interpreting the universe as if it’s telling a story. This leads them to focus on facts that fit the story, while ignoring those that don’t. But we mustn’t let coincidence, the clump, choose the sample space – when we do that, we’re ignoring the surrounding space of near-coincidences.

P307 Discussion of ‘Deccan Traps’, something I hadn’t heard of before – huge geological deposits of lava that are apparently the consequence of meteor strikes *on the other side of the planet*, strikes which generated shockwaves that converged half way round the world and triggered volcanic events.

P338-9 discussion of how brains are recursive and involve neural networks… How the invention of the nest was crucial to human culture, since humans spend so much time and energy rearing their children. And oh, how high sex drives seem related to intelligence… 😉 About those Bonobos.

P348 Humans compliment their intelligence with ‘extelligence’, all the external influences, culture and otherwise, that affect the brain and the mind.

P351 The context for the evolution of the mind is being among lots of other minds.

We are running into problems doing this today, because old-style tribal cultures, even national cultures, are becoming intermingled with an international culture. This leads to clashes between what used to be separate cultures, triggering their breakdown…

P355 Authors cite a concept from Samuel R. Delany’s 1966 novel Empire Star (which I read years ago), about simplex vs complex vs multiplex:

Simplex minds have a single-world view and know exactly what everyone ought to do. Complex minds recognize the existence of different world views. Multiplex ones wonder how useful a specific world view actually is in a world of conflicting paradigms, but find a way to operate despite that.

We are having to cope with multiplexity. We’re grappling with the problem right now: it’s why global politics has suddenly become a lot more complicated than it used to be. Answers are in short supply, but one things seems clear: rigid cultural fundamentalism isn’t going to get us anywhere.

The second to last nonfiction chapter considers the idea that, in the long term (they’ve just reviewed the history of our planet, with its mass extinctions, after all), a planet is not a safe place to be. Where might we go? Back to the idea of the space elevator; Mars; generation ships.

The final chapter acknowledges that this book isn’t called the “Religion of Discworld”… but this is “explained to the hilt” in the second book. They advise, “All religions are true, for a given value of ‘truth’.” P378.

And they ponder what it might mean if there we never do encounter intelligent life, and our world is all there is.

This is our Discworld. In its little cup of spacetime, humanity has invented gods,* philosophies, ethical systems, politics, an unfeasible number of ice-cream flavours and even more esoteric things like ‘natural justice’ and ‘boredom’.

With the footnote: *We apologize to any real gods.”

This entry was posted in Book Notes, Children, Evolution, Narrative. Bookmark the permalink.