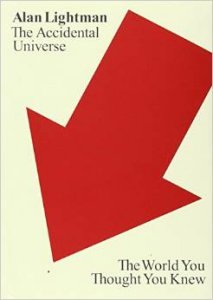 Alan Lightman’s THE ACCIDENTAL UNIVERSE (2014) is a short book of seven essays, most previously published, on various ways the universe is not obviously what it appears to be, or is at odds with what humans might prefer. (Lightman is both a scientist and a novelist, and has served both at Harvard and MIT.) As he says in the preface (p. x),

We often invent what isn’t there. Or ignore what is. Why try to impose order, both in our minds and in our conceptions of external reality. We try to connect. We try to find truth. We dream and we hope. And underneath all of these strivings, we are haunted by the suspicion that what we see and understand of the world is only a tiny piece of the whole.

The first, title, essay concerns how the history of science has can “be viewed as the recasting of phenomena that were once accepted as ‘givens’ as phenomena that can now be understood in terms of fundamental causes and principles.” The goal was a ‘Theory of Everything’, in which all the known forces and particles could be ‘explained’ in terms of a small number of basic principles, and perhaps a few arbitrary values (like the weight of the electron).

This ideal may be unreachable; ideas of string theory and inflation imply ideas of a ‘multiverse’, an infinite number of universes, perhaps each with different sets of physical laws. We just happen to live in one that has physical laws suitable for the existence of stars, and life. Other universes would not. That means in a sense ours is ‘accidental’, not necessary in terms of some fundamental principles that drives our set of physical laws.

“The Temporary Universe” has a touching passage about how the author watches the marriage of his daughter and wish she could have remained 10 years old, or 20, forever. (p23b). Humans long for permanence, despite the evidence of the universe that everything passes. “To my mind, it is one of the profound contradictions of human existence that we long for immortality, indeed fervently believe that something must be unchanging and permanent, when all of the evidence in nature argues against us. I certainly have such a longing. Either I am delusional, or nature is incomplete.” (p34.2)

“The Spiritual Universe” is the author’s attempt to understand how both science and religion can coexist in so many minds. He concludes that science, with its central doctrine that all properties and events in the physical universe are governed by laws, is consistent with the religious idea of a God who is unrestricted by such laws (and has a purpose and will, and so on), as long as God stepped to the sidelines once the universe began.

Yet some scientists apparently reject that central doctrine, believing in a God who does continue to intervene in the world–Francis Collins, Ian Hutchinson, Owen Gingerich.

Author stipulates that he himself is an atheist, but understands that we take some things on faith: what is right or wrong, why certain artworks affect us the way they do. [[ I think this is a very loose use of the word ‘faith’ compared to how most people use the word… ]]

He goes on to discuss kinds of scientific knowledge, and kinds of religious knowledge. The former are subject to rational analysis; the latter are matters of personal experience. We need both, he says; both share a sense of wonder. [[ But he’s sidestepping the issue of religious claims to knowledge about the world that are inconsistent with scientific observations… a key theme of Jerry Coyne’s new book and therefore why religion and science are not really compatible. ]]

“The Symmetrical Universe” wonders why we are so attracted to symmetries — perfect roundness, and symmetry of a six-sided snowflake. Symmetry is highly prized as a guidance in physical theories. He supposes that we crave order amidst a chaotic existence… as long as it’s not boring, which is why we also often prefer a slight bit of asymmetry.

“The Gargantuan Universe” concerns how our conception of the size of the universe has gotten so much larger in recent centuries. The size of the Earth was deduced in the 3rd century BC; the size of the solar system and stars, not til nearly two millennia later. We no longer believe that heavenly objects, or living objects, are made of some different kind of matter than everything else. “Science has vastly expanded the scale of our cosmos, but our emotional reality is still limited by what we can touch with our bodies in the time span of our lives.” p99.8 As Kepler identifies more and more Earth-like planets, we can calculate, even being very generous, what fraction of the universe might be alive: an infinitesimal amount (p101t). If the universe was ‘created’, it seems life was an afterthought.

“The Lawful Universe” begins with the Greek notion of atoms, and how Lucretious used the idea as a defense against the idea of the capriciousness of the gods. Yet God remained a viable hypothesis even until Newton’s time; Newton imagined that God was necessary to keep the planets in their courses. Later, Laplace dismissed that hypothesis.

Scientists remain deeply committed to the lawfulness of the universe, with the example of how, when the discovery of beta particles in the early 20th century seemed to violate the conservation of energy, Pauli had the audacity to propose an as-yet-undiscovered particle, a neutrino, to balance the books (rather than abandoned the idea of the conservation of energy). The neutrino was finally observed in 1956.

Finally “The Disembodied Universe” describes Foucault’s demonstration that the Earth really does rotate — something no one can see or feel, except indirectly.

Since Foucault, more and more of what we know about the universe is undetected and undetectable by our bodies. What we see with our eyes, what we hear with our ears, what we feel with our fingertips, is only a tiny sliver of reality. Little by little, using artificial devices, we have uncovered a hidden reality. It is often a reality that violates common sense. It is often a reality strange to our bodies. It is a reality that forces us to re-examine our most basic concepts of how the world works. And it is a reality that discounts the present moment and our immediate experience of the world.

Maxwell’s equations implied ‘invisible’ light, demonstrated by Hertz’ radio wave apparatus. Einstein overturned conventional ideas about time. And quantum physics revealed that matter can be both particles and waves at the same time.

The irony, says the author, is that as science has revealed more of nature than we were aware of, its consequences in technology (cell phones, etc) have separated us from the nature we have access to; we become self-involved, our experience of nature mediated through our devices. People in a nature preserve staring at their phones; a dinner with 25-year-olds, ditto. Just as the author seems to going into get-off-my-lawn! mode, he admits that this is an old story; cultures have long rebelled against changes in the relationship of humans and nature. And there will always be pockets that rebel, becoming disconnected from the human world, and the natural world, in different measures.

This entry was posted in Book Notes, Cosmology, Philosophy, Science. Bookmark the permalink.