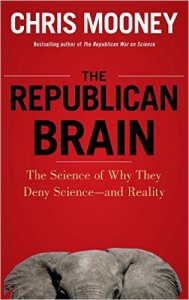 As I alluded in my previous post, I’ve been reading Chris Mooney’s 2012 book The Republican Brain: The Science of Why They Deny Science — and Reality, which explores how psychology can inform the obvious fact that different people react to political and scientific issues differently, not only based on upbringing or social surroundings. I think the title of this book is unfortunate; surely it must alienate half its potential audience, those (Republicans) who would perceive it as some sort of partisan attack.

In fact, while Mooney acknowledges his own position as a liberal, the book is a fairly balanced, it seems to me. It looks at how variations in human personality traits lead to different takes about the world — these variations being essential parts of humanity’s evolutionary response to the world — and then, secondarily, about how in our present society, those traits being more conservative have become less accurate takes on reality; how conservative ideas about science and reality are more often wrong than those of liberals.

And here I will take an aside to put his ideas into my own broader context:

Keeping in mind that science fiction is, at its essence, the literary response to how change affects the human condition, that it arose over the past 150 years or so as such change became ever more and more rapid, and is becoming increasingly rapid, to the point where nowadays — at least in the prosperous west, though increasingly around the entire globe — new devices and apps appear every few months that potentially change the way we interact with our environment. Who can keep up?

At the same time, humanity evolved over millions of years in situations that were entirely stable, from generation to generation, compared to recent generations. This Chris Mooney book, The Republican Brain, explores the ranges of human personality traits and how they instantiate as moral beliefs and political attitudes. As I suggested in a previous post, surely this range of mental attitudes has a general survival advantage, in the same way any other kind of genetic diversity does: because a monolithic set of genes for any trait or attitude could result in extinction if environmental changes disadvantaged whatever those genes were primed for. Thus, we might suppose, both ‘liberal’ and ‘conservative’ attitudes are presumably essential for the well-being of the human species, across changing environmental circumstances over many many millennia.

But those many millennia were, as I said, relatively stable, unlike the past few thousand years and especially the past century or two. Thus… what might we suspect? Perhaps that the forces of conservatism, which value stability, might have increasing trouble keeping up. And that is my science fictional gloss on my approach to Mooney’s book.

And so, this is what Mooney’s book is bascially about: that conservatives/Republican ideas are more generally at a discord with reality, than liberal/Democratic ideas are.

He spends some time examining specific issues (which he did in an entire previous book), but mainly looks at studies of psychology, that identify key aspects of conservative and liberal mindsets, and how their ideologies satisfy particular psychological needs, aligned along a standard psychological identification of five personality traits — OCEAN: openness to experience, conscientiousness, extraversion, agreeableness, and neuroticism. Thus this book by Mooney echoes the Jonathan Haidt book I read recently, but while Haidt focused on moral intuitions, Mooney focuses on psychological traits. And they are, of course, rather similar.

So conservatism is about (p60)

the resistance to change and the acceptance or rationalization of inequality … Behind it all lays the deep human desire to manage uncertainty and fear, and to do so by finding something certain, stable, and unchanging to believe in and cling to.

are very intolerant of ambiguity, and very inclined toward group-think and distrustful of outsiders (often including racial outsiders). They extol traditional values, are very conventional, submit to established leaders, and don’t seem to care much about dissent or civil liberties. They are known for their closed-mindedness, and, indeed, their Manichean view of the world—good and evil, right and wrong, saved and damned, white and black. They have a need for order: Conversely, they can’t tolerate uncertainty. In America, they are often religiously conservative fundamentalists who believe the Bible is the unedited world of God.

In contrast, liberals are driven by a need for understanding, for inclusiveness, thus a need for change — attitudes the columnnist Jonah Goldberg hilariously parodies as “Cowardice and appeasement; comfort with confusion and ignorance; recklessness; indecisiveness and similar cognitive defects; terror mismanagement” (!), comments which echo those by Ann Coulter and Cal Thomas cited earlier (p60-61). It’s extremely revealing to see how conservatives view liberals.

Mooney echoes ideas I’ve seen in many other recent books: that factual arguments don’t convince anyone; that we are all subject to motivated reasoning (with background about the evolution of intuitive vs. reasoning in our minds, and how our later, System 2, minds ‘lawyer’ or rationalize our System 1 intuitive judgements –cf. Haidt); and how science is the method to overcome the reasoning biases of individual minds.

There were a couple ideas new to me. I’ve often thought, and perhaps expressed in this blog, the idea about running elections based upon some objective criteria to voters: ask voters about various specific factual issues, and count votes with accurate responses only. Does the voter know that the Earth revolves around the Sun, vs. vice versa? That kind of thing. Mooney describes a study that addressed this idea, and the result was counter-intuitive: voters with more accurate knowledge were *more* adept at creating arguments to support their [unfactual] views. Mooney calls these “smart idiots.” This underscores our species’ talent for motivated reasoning.

I do have some quibbles about the book overall. Mooney addresses various issues of policy and science, to describe how conservatives are wrong, yet more or less assumes that the expert consensus on these issues is the correct one. I can anticipate conservative responses: the consensus is a liberal conspiracy, and so on. You see this every day, as with Ted Cruz’ recent NPR interview: “Climate change is the perfect pseudoscientific theory for a big government politician who wants more power.”

Motivated reasoning. Today’s Science Friday on NPR had a segment that claimed that climate scientists, if anything, are *under-estimating* the potential damage of climate change, to avoid political repercussions, and how conservatives automatically resist any problem whose solution might involve government action, because government action must always be wrong.

I think Mooney might have more forcefully underscored why he thinks scientific consensus are accurate. (Historical examples, perhaps. Looking to the future, the climate change denials of Cruz and Rubio and all the other Republican candidates for president will live in infamy.)

Mooney does offer some evolutionary perspective — back to the beginning; why are we this way in the first place? p125:

Some thinkers suggest that evolution may have built us to vary in subtle but important ways because a society fares better when it has both “liberal” and also “conservative” tendencies in it. What would the core tendencies be? Something like maintaining order, versus generating innovation. Protecting and serving, versus creating and challenging. Once again, we’re back to the yin-and-yang view of our politics.

Which echoes my going-in position.

Finally, Mooney emphasizes [despite the title] that both conservative and liberal attitudes are essential to the human condition, and suggests what each ‘side’ might learn from the other. Conservatives: pay attention to facts.

And finally, finally, the author wonders how does he know he’s right? Because he’s willing to be wrong. “I believe that I am right, but I know that I could be wrong.”

And, “Am I wrong about any of this? If so, you will have to show me where. I will strive to listen.”

And that is my position too.