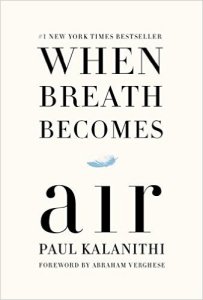 This is an almost unbearably sad, yet poignant and moving and thoughtful, memoir by a young Stanford neurosurgeon who is diagnosed with stage IV lung cancer at the age of 36. His life changes from being the physician to being the patient, as he wrestles with how to plan the little time he has left, and what there is about life that means anything.

That last theme ties this to the two earlier books just reviewed. Kalanithi is an over-achiever, studying neuroscience and going to medical school but also well-read as a child (courtesy his concerned mother) and taking time for an MA in English literature. The first half of the book recounts his growing up in Kingman, Arizona, where his father was a surgeon and worked long hours. At Stanford he’s struck by the insight that the brain is an organ too:

…the mind was simply the operation of the brain, an idea that struck me with force; it startled my naive understanding of the world. Of course, it must be true–what were our brains doing, otherwise? Though we had free will, we were also biological organisms–the brain was an organ, subject to all the laws of physics, too! Literature provided a rich account of human meaning; the brain, then, was the machinery that somehow enabled it. It seemed like magic.

So here is, unexpectedly, begins a recurring theme that appeals to a science-fictional sensibility: how knowledge of the world informs the meaning of human existence. He pursues degrees in English lit and human biology:

I was driven less by achievement than by trying to understand, in earnest: What makes human life meaningful? I still felt literature provided the best account of the life of the mind, while neuroscience laid down the most elegant rules of the brain. Meaning, while a slippery concept, seemed inextricable from human relationships and moral values.

And he ponders Eliot and Nabokov and Conrad.

His English degree helps but,

I was also increasingly certain that I had little desire to continue in literary studies, whose main preoccupations had begun to strike me as overly political and averse to science. One of my thesis advisers remarked that finding a community for myself in the literary world would e difficult, because most English PhDs reacted to science, as he put it, “likes apes to fire, with sheer terror.”

Heh. (There is the special province of science fiction that traditional literature does not understand.)

The bulk of the first half of the book, then, recounts his lab work; his residency; the grind of long days of surgery; learning how to make medical decisions, where there are options, based on what each patient values most in life.

Part II picks up with the prologue left off, as the author and his wife confront the CT scans showing evidence of his cancer. He begins courses of treatment, rethinks the trajectory of his life, and revisits the struggle for what makes life worth living.

Remarkably, he and his wife decide to have a child — even though he can’t know how much longer he has to live.

It had been something we’d always wanted, and we were both impelled by the instinct to do it still, to add another chair to our family’s table.

Though not religious, he revisits his family’s rituals, visiting church, pondering whether without God there is any basis for meaning.

Yet the paradox is that scientific methodology is the product of human minds and thus cannot reach some permanent truth. We build scientific theories to organize and manipulate the world, to reduce phenomena into manageable units. Science is based on reproducibility and manufactured objectivity. As strong as that makes its ability to generate claims about matter and energy, it also makes scientific knowledge inapplicable to the existential, visceral nature of human life, which is unique and subjective and unpredictable…

He decides there will always be a gap between “core passions” and scientific theory. He finds compelling the central values of Christianity–“sacrifice, redemption, forgiveness”, and the tension in the Bible between justice and mercy. But he rejects any kind of revelation as a source of epistemic authority. His conclusion, for the moment, is that

In the end, it cannot be doubted that each of us can see only a part of the picture. The doctor sees one, the patient another, the engineer a third, …. Human knowledge is never contained in one person. It grows from the relationships we create between each other and the world, and still it is never complete.

We know how the story will end, and at the end he is left with thoughts of his daughter Cady’s future, a final source of meaning for him.

This entry was posted in Book Notes, Meaning, Religion, Science. Bookmark the permalink.