Rereading classic SF in the 21st century: In which I both tease out themes of, and try to summarize, Isaac Asimov’s first Foundation book.

I reread Isaac Asimov’s Foundation, i.e. the first book in the ‘Foundation Trilogy,’ a couple weeks ago. I think this is the fifth time I’ve read the book, though on only two of those four previous occasions did I soldier on to read the remaining two books of the ‘trilogy.’ (And of the various sequels Asimov wrote much later, in the 1980s, I’ve read a couple of them once only, a couple others not at all.) (And, despite Gregory Benford’s acknowledgement of my role in his Foundation novel, mentioned here, http://www.markrkelly.com/Views/?p=710, I have not read any of the three B’s later Foundation novels. I will.) 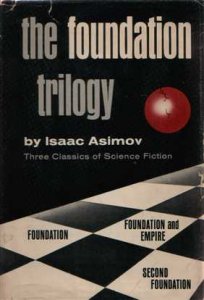 I put ‘trilogy’ in quotes because while the ‘Foundation Trilogy’ was an omnibus of three previously published books, most of the contents of those books were published years earlier as a series of novelettes and novellas, in Astounding Science Fiction magazine, throughout the 1940s. When gathered together for book publication in their early 1950s by Gnome Press, they were divided up into three volumes, titled Foundation, Foundation and Empire, and Second Foundation. Each was a linked collection of from two to five stories; none of them was exactly a novel.

The three books were gathered together in a single volume called The Foundation Trilogy: Three Classics of Science Fiction in 1963 by Doubleday, a volume that went on to become a featured selection of the Science Fiction Book Club (which was an arm of Doubleday). And that volume was in fact one of the three introductory selections that I chose when I first joined the club in 1969. Later I also bought the ubiquitous paperback editions from Avon, with their distinctive geometrical illustrations on white backgrounds. 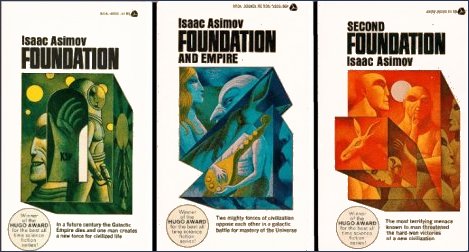 These books are still the most famous works by Asimov, and represent a stage in what Donald Wollheim, in his book The Universe Makers, considered the default future history of mankind — (discussed here: http://www.markrkelly.com/Blog/2015/09/18/rereading-donald-a-wollheims-the-universe-makers/) —  as conceived by science fiction of the time, which is to say, a far future era in which humanity has expanded into outer space and has settled *millions* of planets, inhabiting virtually the entire galaxy as a single human empire.

Asimov’s interest in these stories was the idea of how human history might be foretold; he drew heavily on the ideas of Edward Gibbon’s famous The History of the Decline and Fall of the Roman Empire (https://en.wikipedia.org/wiki/The_History_of_the_Decline_and_Fall_of_the_Roman_Empire), about how such a mighty empire could begin to decay at the edges and gradually bring itself down. Asimov’s premise was that advanced mathematics, and theories of history, could *predict* such a decay — and moreover, suggest ways that small, surgically-precise steps in local politics, might ameliorate that decay, in order to rebuild a second, stronger empire.

I think in my previous readings of this book, I lost interest at the end because the last story of this first book is curiously undramatic. Nothing happens at the end, other than the main character deciding not to intervene, and just let things happen. Why he does that, and what he thinks will happen, are significant, but they don’t leave you with any suspense about what might happen next.

Here are some general notes on the series as a whole, and some very condensed summaries of the five stories in the first book, Foundation, first published in 1951.

Part I, The Psychohistorians

(I hope I’m not writing a kind of thesis here, with summaries and analyses that lazy students will find via Google and copy from…)

This entry was posted in Isaac Asimov, science fiction. Bookmark the permalink.