It is worse, much worse, than you think. The slowness of climate change is a fairy tale, perhaps as pernicious as the one that says it isn’t happening at all, and comes to us bundled with several others in an anthology of comforting delusions: that global warming is an Arctic saga, unfolding remotely; that it is strictly a matter of sea level and coastlines, not an enveloping crisis sparing no place and leaving no life undeformed; that it is a crisis of the “natural” world, not the human one; that those two are distinct, and that we live today somehow outside or beyond or at the very least defended against nature, not inescapably within and literally overwhelmed by it; that wealth can be a shield against the ravages of warming; that the burning of fossil fuels is the price of continued economic growth; that growth, and the technology it produces, will allow us to engineer our way out of environmental disaster; that there is any analogue to the scale or scope of this threat, in the long span of human history, that might give us confidence in staring it down.

None of this is true. 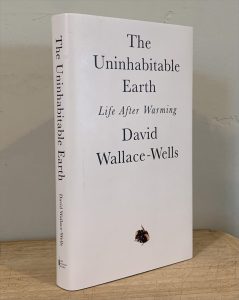 Thus opens this book of 228 pages of text sourced by 65 pages of notes and references. It’s remorseless, in much the same way Jonathan Schell’s The Fate of the Earth was back in 1982 about the consequences of nuclear war. Which is appropriate; the two threats are equally dire.

The first section of some 35 pages summarizes the situation. A second section lists the various ways global warming will affect the environment – the many ways beyond rising sea levels. Two final sections I’ll cover in a future post.

Global warming has improbably compressed into two generations the entire story of human civilization. First, the project of remaking the planet so that it is undeniably ours, a project who exhaust, the poison of emissions, now casually works its way through millennia of ice so quickly you can see the melt with a naked eye, destroying the environmental conditions that have held stable and steadily governed for literally all of human history. That has been the work of a single generation. The second generation faces a very different task: the project of preserving our collective future, forestalling that devastation and engineering an alternate path. There is simply no analogy to draw on, outside of mythology and theology—and perhaps the Cold War prospect of mutually assured destruction.

(pause for today – will finish tomorrow or the next.)

There are now, trapped in Arctic ice, diseases that have not circulated in the air for millions of years—in some cases, since before humans were around to encounter them. Which means our immune systems would have no idea how to fight back when those prehistorical plagues emerge from the ice.

(This sources my comments a while back about how COVID could be such a disease, in principle.)